Business and Economy of Jaunpur

Jaunpur is a small city and a municipal board that is situated in the northwest of the Varanasi District that is situated on the eastern part of the North Indian state of Uttar Pradesh. It has a total population of 4,476,072 people as per the Indian census of 2011. Demographically, it still resembles the rest of the Purvanchal with agriculture being the predominant occupation with low human development index. Jaunpur consists of 6 tehsils, 21 blocks, 1514 panchayats, 2 constituencies and 9 assembly area. 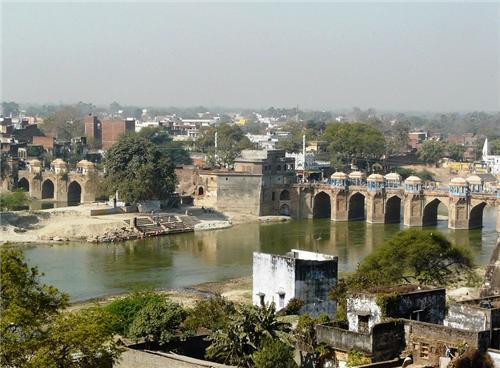 During the British Rule, Jaunpur District was annexed to British India based on the permanent settlement made in 1779 and was also subject to Zamindari system of land revenue collection. Though in the 1857 revolt, Sikh troops of Jaunpur joined the Indian rebels, the district was eventually reconquered by the British with the help of Gurkha Troops from Nepal. From then on, Jaunpur has become a District Administrative Centre.

The economic development of Jaunpur is dependent on agriculture as three-fourth of the population is involved in agriculture and the major crops are pigeon pea, rice, pearl millet, wheat, maize, chickpea and black gram. Other than this, onion, potato and crops for fodder are also raised. Irrigation for the crops is done both with reservoirs as well as private water resources. Animal husbandry is done along with the agriculture and a cotton mill is operational near Karanja Kala and provides occupation to the people.

This is due to the absence of heavy industries in the district. Now only, several industries are coming up along Jaunpur-Varanasi highway.

Other manufactured products are chemical fertiliser, carpets, perfume, furniture, incense and cement. Other than these repair workshops, print shops and internet cafes are also available in Jaunpur.

Jaunpur consists of both Hindus and Muslims living in harmony for several decades. This could also be owed to the fact that the Sharqi Dynasty which ruled them was the indigenous converts to Islam and were not the descendants of Persians or Afghans. Hindi and Urdu were the major language of Jaunpur. The Urdu language and the Sufi knowledge and culture flourished under Jaunpur Sultanate.

Jaunpur is also underdeveloped like most of the other eastern Uttar Pradesh and is yet to taste the fruits of the economic growth. Currently, there are some major industries that operate in the city as well as the traditional industries like perfume though it is becoming unviable now-a-days. UP Government is increasingly taking steps to improve the growth of the industrial sectors by setting up an Industrial Area in the Santhariya region to promote industrial growth and expansion. Government is continuously allotting land to the budding industrialists for setting up more industries and the corporate presence in the financial services and retail industry has been growing for the past three years.