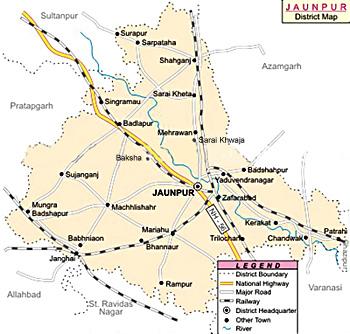 Jaunpur City, otherwise known as Sheeraz-e-Hind, was founded in 1359 by Feroz Shah Tughlaq in fond memory of his cousin Muhammad bin Tughluq or Jauna Khan. The city was named after him as Jaunpur.

The climate of the region is consistent with that of the Central Highlands and Northern Plains. This includes Aravalli range which is a hot as well as semi-arid region of 4.3 and hot dry eco-region of 9.2. The district’s temperature varies from 40C (390F) to 440C (1110F). The recorded annual rainfall is 1,098 mm (43.2 in). The rainy season begins towards end June and continues till October. This is a total of 46 rainy days and out of that 31 days fall during monsoon seasons itself though the district suffers regular drought and pestilence.

The weather would be pleasant during October to March of every year. Though in summer cotton clothes are ideal, woollen are the best during winters.

The district is made up of shallow river valleys and flat plain with the main rivers being Gomti and Sai. The land of the region slopes in the same direction as that of the flow of these rivers. Thus, there is a more elevated area in the northwest and a less elevated area of land in the south east.

Beneath the surface of the district of Jaunpur, you will find quaternary sediments that are made up of sand, silt and clay that were washed away by the Ganga river system. Below is Vindhya Range Bedrock.

There is not much mineral deposits in the region but the limestone found are available as conglomerate kanker which is available in nodular as well as block forms. These could be used as building materials. Twice the district has registered for earthquakes in the years 1927 as well as 1954 and both were large ones.