Raja, the title of Raja of Jaunpur, meaning the King of Jaunpur, is held by the one who represents the Brahman family started by Shiv Lal Dube. Being the proprietor of the largest estate in the ancient district of Jaunpur, the family rightly deserves the title. 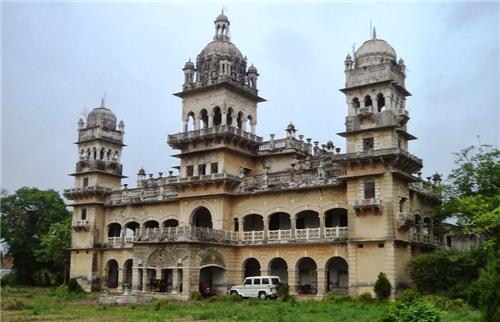 Moti Lal Dube, a wealthy banker, had a son in 1776, who was given birth at the family residence in Amauli Fatehpur and was named as Shiv Lal Dube. Shiv Lal Dube grew up to become the banker of the Nawab, Kalb Ali Beg, who is known to have formed the city of Jaunpur. After the death of his father, Shiv Lal Dube’s wealth saw a tremendous increase, owing to the path of banking set by his late father. Consequently, he was bestowed the title of “Raja Bahadur" in 1797 and simultaneously rewarded with the taluka of Badlapur. When he died in 1836, his wealth consisted of large estates in Benaras, Gorakhpur, Azamgarh, Mirzapur, apart from Jaunpur.

After Shiv Lal Dube’s death, the title and the property passed on to his grand son Raja Ram Gulam, inspite of his living son, Raja Bal Dutt. When Raja Ram Gulam expired in 1843, his father, Raja Bal Dutt, received the title along with the property, who subsequently died in the following year 1844. His second son Raja Lachamn Gulam became the successor.

After the subsequent death of Raja Lachamn Gulam in 1845, the management of the property was passed on to his mother, Rani Tilak Kunwer. She managed the property until her death in 1848, when the property was inherited by her minor grand son, Raja Shiv Gulam, the son of Raja Ram Gulam.

The estate saw a steep downfall under the new successor; chief causes being the minority of the successor and the family disputes. After the death of Raja Shiv Gulam, the estate was held by the management, which was then released back in 1869.

The released property was passed on to Raja Lachmi Narayan. With his consent, the property was inherited by Raja Harihar Dutt, after his death in 1875. Raja Harihar Dutt was the first son of Raja Hari Gulam. He was succeeded by his son Raja Shanker Dutt, who managed the estate until his death in 1897. He was survived by his widow Rani Gumani, who was given the right to adopt a son, by his late husband, to take care of the estate.

Under these circumstances, the estate was again taken control of by the management. This time on the behalf of Raja Shri krishn Dutt, who was known to be the direct descendent of Sadanand Dube of Amauli. Sadanand Dube was the elder brother of Raja Shiv Lal, the first Raja of Jaunpur.

The riyasat was awarded to Raja Shri Krishn Dutt, subsequently after he attained the majority in 1916. After his death in 1944, the charge was taken over by Raja Yadvendra Dutt and continued to be the owner till he died in 1999.

Currently, the charge of the riyasat is with Avanindra Dutt, born in 1947 in Allahabad; and owns the title of Raja Jaunpur.

Explore more about History of Jaunpur